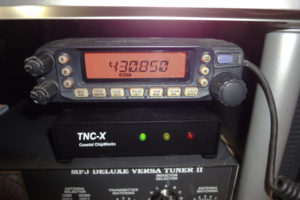 A Digipeater is a station that does digital repeating. Unlike full-duplex VHF/UHF voice repeaters, a digipeater will receive a packet, process it, and retransmit on the same frequency.  A digipeater which operates on multiple frequencies or routes between RF and Internet traffic is called a gateway.

In classic packet radio each such hop had to be explicitly included in the packet by the sender at origination.  In APRS all digipeaters use generic aliases. The sender does not have to know the callsign of the digipeater but just indicate the number of hops he wants to go.

Digipeating is defined in AX.25 specification document.  An initiating station can include in each packet a list of intermediate stations which are supposed to digipeat the packet, passing it on toward the desired destination.  The list of intermediate stations is called the path.  Stations receiving packets examine the path of received packets.  Using it’s configuration information a receiving station can decide if a packet is a candidate for digipeating.  When this is true the packet addressing information is modified slightly and the modified packet is transmitted.

The idea is to get packets to propagate outward from the initiating station… but not so far as to be an unnecessary burden on the system and surrounding users.

The RMS Gateway Digipeater that LMARC owns and operates covers the Chattanooga, TN and Lookout Mountain areas, as well as most all of NW GA.  It operates on a frequency of 145.750 and is designated W4EDP-10.

Winlink, also known as the Winlink 2000 Network, is a worldwide radio messaging system that uses amateur-band radio frequencies to provide radio interconnection services that include email with attachments, position reporting, weather bulletins, emergency relief communications, and message relay.  The system is built and administered by volunteers and administered by the Amateur Radio Safety Foundation Inc.

Generally, email communications over amateur radio in the 21st century is now considered normal and commonplace.  Email via High frequency (HF) can be used nearly everywhere on the planet, and is made possible by connecting an HF single sideband (SSB) transceiver system to a computer, modem interface, and appropriate software.  The HF modem technologies include PACTOR, Winmor, and Automatic Link Establishment (ALE).

The APRS Digipeater that LMARC owns and operates covers the Chattanooga, TN and Lookout Mountain areas, as well as most all of NW GA and NE AL.  It operates on a frequency of 144.390 and is designated N4LMC-3.

APRS data is typically transmitted on a single shared frequency to be repeated locally by area relay stations (digipeaters) for widespread local consumption.  In addition, all such data is typically ingested into the APRS Internet System (APRS-IS) via an Internet-connected receiver (IGate) and distributed globally for ubiquitous and immediate access (see more below on this).  Data shared via radio or Internet is collected by all users and can be combined with external map data to build a shared live view.  Take a look at https://aprs.fi and see what’s happening around you!

APRS has been developed since the late 1980s by Bob Bruninga, WB4APR, currently a senior research engineer at the United States Naval Academy. He still maintains the main APRS Web site. The initialism “APRS” was derived from his call sign.

An IGate is a type of gateway APRS station.  It is similar to a network router in the TCP/IP world, or to a “voting receiver” in a wide-area radio repeater network.  The IGate’s job is to selectively allow packets to cross between the APRS-IS and the local RF network.

Going from RF to APRS-IS is the simpler of the two operations.  The IGate station needs to successfully connect to APRS-IS which requires a rudimentary password.  Packets received via RF are sent out on the APRS-IS side.  IGate implementations take care of reformatting the packet for the APRS-IS.

Gating to the RF side is a little trickier.  The technical parts are not difficult but the limitations of the RF channel and regulatory restrictions attendant with radio transmissions make things more difficult.  Many IGate implementations will only send to RF those packets destined for stations that have been recently heard on the RF side or that are in a list of designated destination stations.

“Digipeater” is short for “Digital Repeater”; a repeater for packet data rather than voice. Unlike the standard voice repeater that receives on one frequency and retransmits what it hears simultaneously on another frequency, the usual digipeater is a single frequency device. It receives a packet of data, stores it in internal memory and then a moment later retransmits it on the SAME frequency. Digpeating is much more critical to APRS than to conventional packet because APRS heavily involves packet data transmission to and from moving vehicles. Traditional packet was overwhelmingly used between fixed locations, typically with better and higher antennas.

You do not have to have a Paypal account to complete a credit card transaction.